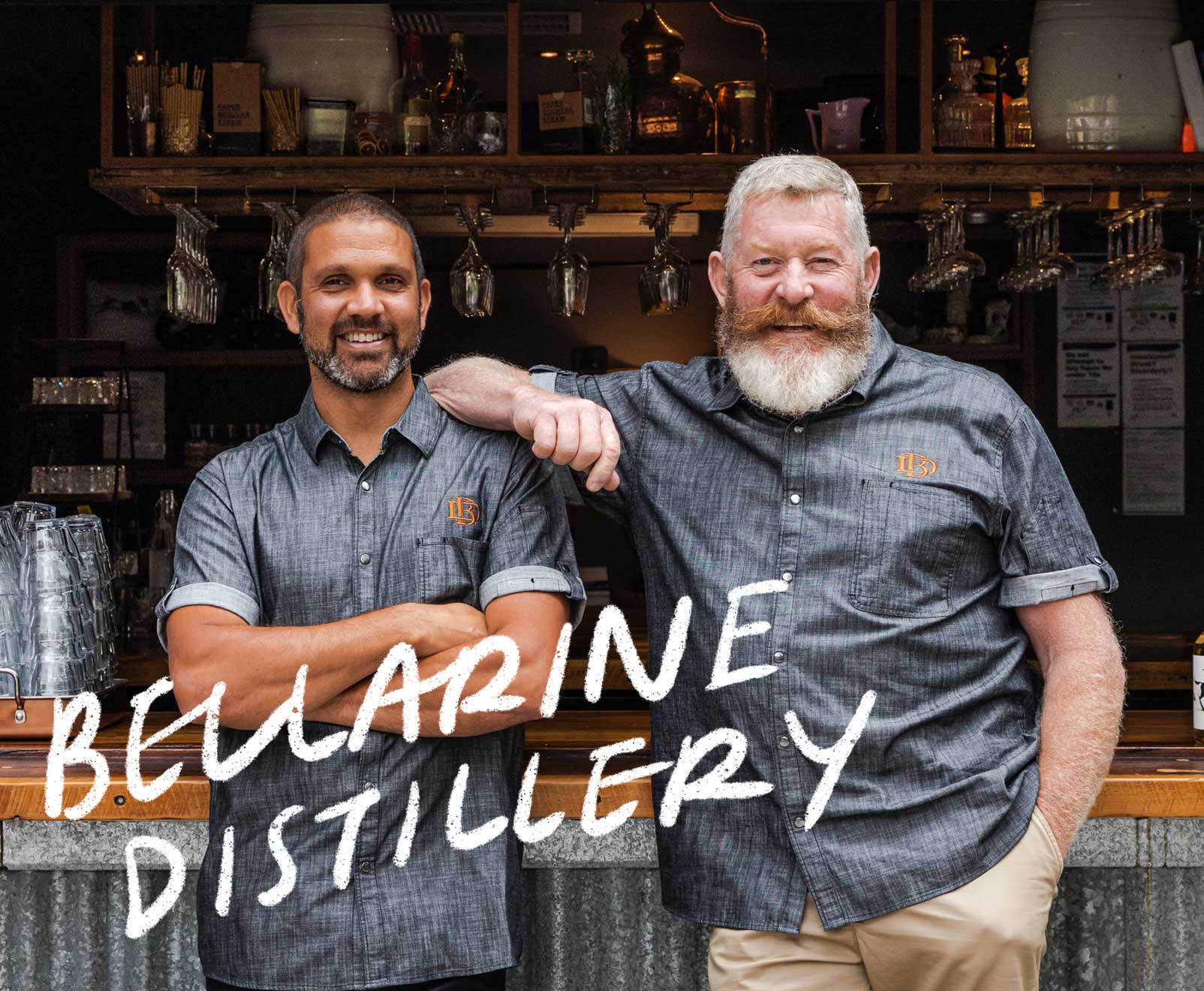 Set on seven acres in the heart of the Bellarine, the Bellarine Distillery is known for their award-winning gin and whiskey, and also their dogs. More on that later - keep reading!

We're excited to collaborate with the Bellarine Distillery as part of our We Wear Cargo Crew campaign and caught up with Russ in this Q&A to learn more about his business.

1. To kick things off, can you introduce yourself and tell us about the Bellarine Distillery?

I am the Founder of Bellarine Distillery & Cellar Door. We are located on the beautiful Bellarine Peninsula a lovely 90 minute drive around the bay from Melbourne.

Our property previously operated as a chicken farm for 60 years and we have put a lot of love into reinvigorating the old sheds which now house our cellar door “The Whiskery”.

Bellarine Distillery was established with my wife Lorelle in 2015, we are the first distillery on the Bellarine Peninsula and the first in the Greater Geelong region since the closure of the Corio Disitillery in the 1980’s.

The idea originated - as most great ideas do - after a couple of drinks. Having visited Scotland in 2012 and the romance of the highlands the dream of starting our own distillery seemed like a good idea to make come true.

In 2019, our Distillery Manager Craig Michael and his wife Nicky, became our business partners and together we have produced multiple award-winning Gins, three sold-out single malt Whiskeys and continue to build a wonderful collection of future whisky releases.

"Bellarine Distillery was established with my wife Lorelle in 2015, we are the first distillery on the Bellarine Peninsula and the first in the Greater Geelong region since the closure of the Corio Distillery in the 1980’s."

2. We've loved collaborating with you on your uniform pieces. What Cargo Crew pieces do you enjoy wearing most and why?

The Banjo Work Shirts have been a hit at the formal offsite events we do. They help us to look sharp, professional and the embroidery work is beautiful! I love the press stud buttons for ease, and the gussets on the back of the shoulder help when we are lifting boxes of product. We don’t have to be precious with the shirts, we can put in the grunt work with them setting up and then host events and they still look great.

Our staff love wearing the Deluxe Canvas aprons, the beautiful embroidery makes our logo pop, and they are so versatile we wear them to farmers markets and cocktail events.

The Scout Puffer vests have been a godsend with the weather changing! They are super warm but being a vest, we find we don’t overheat when the pace picks up.

The Cargo Crew team are wonderful to work with. The quality of their products is great, and they are fast and efficient to deal with.

3. We love a good whiskey and gin. But if you must choose one to have for the rest of your life, which would you choose?

Ooh, that’s a difficult question. You may as well ask me “Who is my favourite child”.

But if you’re going to force me to choose only one then I choose whisky. I guess I’m a campfire kind of guy.

4. We see that there are a couple of dogs that feature in your products - what's the story behind those dogs?

The theme of dogs started out with my daughter’s dog Teddy who was visiting the property not long after we had purchased it.

We are on a busy main road and Teddy caught sight of the resident fox who dashed across the road and Teddy bolted straight after him dodging traffic. I thought he was absolutely a goner, but he ran right back across the traffic again with not a scratch on him.

My daughter would have killed me if something happened to him. I was so relieved when I saw him unharmed, we thought he deserved to be honoured on the first bottle we produced, and so began the tradition of our family dogs being our label heroes.

Dodger and Rosey are sadly no longer with us, but Trooper is 15 and still going on strong. Our youngest dog Billy, our little rascal was honoured on our first bottle of single malt whiskey ‘Bad Boy Billy’ which sold out on release.

Bear is the only dog on our labels who isn’t our own.

We found out about the story of Bear and the work he does with the Detection Dog team out of the University of Sunshine Coast and knew we wanted to contribute. Bear is an incredibly special dog and through a partnership with the IFAW he goes out with his handlers after bushfires and rescues injured and sick Koalas. We were so inspired and produced ‘Bear & The Koalas’ our charity gin.

For the first run, all of our suppliers donated their goods, even our artist Stuart McLachlan donated the image he created and we were able to donate 100% of the proceeds from the sale of the initial gin release which resulted in $40,000 going to Bear to support the wonderful work that he and the other detection dogs do.

The gin was so popular that we have added it to our core range, and we still donate money from every bottle of Bear & The Koalas to Bear and other canine charities.

5. And finally, what's your dream for the Bellarine Distillery? Where do you see the business in a year or two?

Our big dream is to honor our love and appreciation for the craft of distilling with a purpose-built iconic facility that provides visitors the opportunity to become more intimate with the process of making our spirits and calls to visitors from far and wide to come and experience everything the Bellarine Peninsula has to offer; it is such a special part of the world.

But for now, we are dedicated to building a large barrel hall which will house our ever-growing collection of maturing whisky barrels and this will set us on the path to that dream.

We have been so blessed by the support of our customers and local community, we wouldn’t be where we are today without their love and loyalty. We are a family business, and love that our staff are like (and in some cases are) our extended family.

One of the most amazing things about seeing this dream come to life has been the wonderful people we have met, whether they be customers at our cellar door, market goers, staff or suppliers, we are surrounded by the loveliest group of people and that makes the dream coming true all the sweeter…the product testing doesn’t hurt either!

"One of the most amazing things about seeing this dream come to life has been the wonderful people we have met, whether they be customers at our cellar door, market goers, staff or suppliers, we are surrounded by the loveliest group of people and that makes the dream coming true all the sweeter."

Copyright © Cargo Crew 2022. All images and products are protected under copyright law. Credit this website when using any images on social media and send an email request for any other usages.